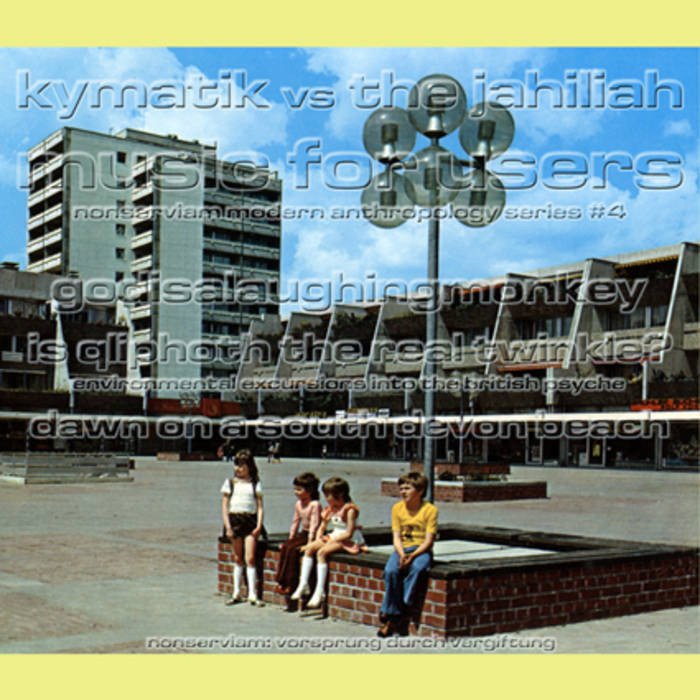 Released in Ambisonic UHJ surround sound (Is Qliphoth the Real Twinkle and Dawn on a South Devon Beach). . .
Yet again Kymatik do their best to baffle any growing audience they might be creating by releasing one of the most unmusical CD's I've heard for some time. Following the fine split CD, The Paignton Anomaly - this CD begins with most accessible track 'God is a Laughing Monkey'. This is a reworking of a C.N.S.(?) track from 1989, which is actually very much in the vein of 'Button Man for the City' or 'Dentists for Mice' from Kymatik's first two CD's but a lot shorter. The problem is that it's the only musical thing on the release. Following that is 'Dawn on a South Devon Beach'. This is a recording of waves rolling onto a beach. Sounds fine but nothing to comment on really. The final and longest track is 'Is Qliphoth the Real Twinkle?' It's like a oncoming microscopic technological nightmare full of unseen predatory wildlife slowly encroaching on the listener with impending doom. ...It halts as the sounds of a busy street herald the end of the piece. Although musically I find this track incomprehensible, it does have some sort of horrific draw. Another willful attempt to remain on the very edges of what anyone might call 'music'. Probably an amazing listen on a bag full of downers, which is what the cover notes and the track titles would seem to suggest and a quick googling of 'twilite sleep' will confirm. Also the bottom of the CD cover says "vorsprung durch vergiftung" . It's almost not there. Death Ambient? Who the hell knows!
Mad Mosse (Ho-Style Fanzine)